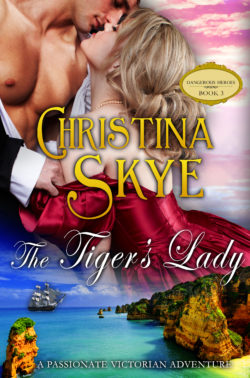 A  Rajah’s Prize or a Dark Entrapment?
In the shadowy pall of gaslit London streets, Barrett Winslow is stalked by a ruthless enemy in search of a confidence she can never reveal. When fate tosses her into the arms of an exotic stranger, she’s swept away to a steamy paradise that hides deadly secrets and forbidden passions.

Fierce Protector or Dark Betrayer?
To London’s rich and powerful he is Deveril Pagan, Viscount St. Cyr, envied by all men and desired by all women. But in the mist-covered emerald hills of Ceylon, he is called the Tiger Sahib, and he is haunted by the curse of a priceless, fabled ruby — whose blood-red facets pulse with a savage power that drives men to unquenchable greed and women to unspeakable desire.

Lovers Bound by Darkest Destiny.
From the glittering corridors of London’s elite to the wind-swept shores of colonial Ceylon, Barrett and Pagan flee the fierce fate that throbs in the crimson heart of the legendary jewel … driving them to stolen passion and unthinkable evil in the sultry, tropical nights. Only one man stands between Barrett and the darkness … and he might be the greatest threat of all…

Originally published by Dell under the title THE RUBY.